County Donegal is Ireland’s wild child. Home to some of the country’s most sublime scenery, the northwest corner of the country boasts gold-sand beaches, towering cliffs and rugged hillsides. Shrouded in mist and battered by the elements, its evocative landscapes are like the backdrop of a fantasy novel.

The Wild Atlantic Way wraps around the topsy-turvy coastline of this Gaelic-speaking region. From abandoned castles, to quaint seaside villages, to majestic mist-covered landscapes, the winding coastal route showcases many of the top things to do in Donegal.

Our Route along the Wild Atlantic Way

Dan and I chose to road trip around County Donegal during a short visit to Ireland. We were drawn to the area’s wild and unspoiled scenery, as well as to the fact that neither of us had visited the area in the past.

With only three days in Ireland, we decided to follow a portion of the Wild Atlantic Way—a 2,500km driving route that exposes the best of Ireland’s western coastline. The winding scenic road meanders past craggy outcrops, lonely beaches and windswept hillsides. It is at once subtle yet dramatic, monochrome yet colorful.

Our Wild Atlantic Way road trip began with a three hour drive from Dublin to Donegal Town. From there, we followed the coastline past sea cliffs, castles, lighthouses and sleepy coastal villages.

Exploring Donegal in-depth requires more than just two days. During our drive, we found ourselves continually taking shortcuts in order to reach our destination by nightfall. With more time, we would have loved to get lost along the lonely side roads of Ireland’s Wild Atlantic Way.

Regardless, our road trip allowed us to visit some of the top tourist attractions in Donegal, while giving us a sampling of the area’s untouched beauty.

Things to Do in Donegal

Donegal is full of things to do and places to visit. The county’s rugged interior—with its remote mountain passes and shimmering lakes—borders a labyrinthine coastline sprinkled with thousands of islets, coves, and isolated towns. County Donegal is home to the tallest cliffs in Ireland, as well as the country’s second-largest national park.

And yet, despite its surreal landscapes and picturesque scenery, it remains largely off-the-beaten-path. 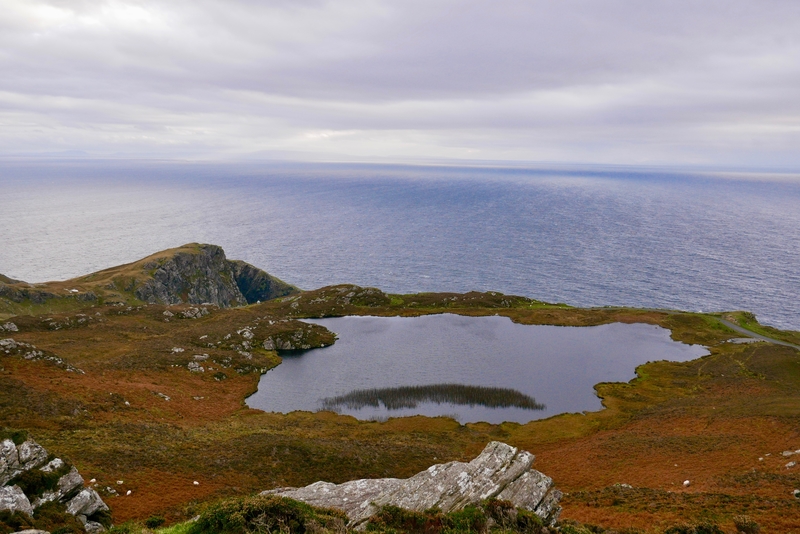 We did not spot any large tour buses during our road trip around Donegal. Nor did we see any crowds along the Wild Atlantic Way. And while I am fully aware that we visited the area during a rainy week in October, I couldn’t help but feel as though we had stumbled upon a corner of the Emerald Isle that is often overlooked by travelers.

Our first stop along the Wild Atlantic Way, was Donegal—the area’s namesake town. Pretty and compact, the town sits in a photogenic spot at the mouth of Donegal Bay. Boasting a mountainous backdrop, a well-preserved castle, and a good choice of places to eat and sleep, Donegal is an excellent base for exploring the popular coastline nearby. 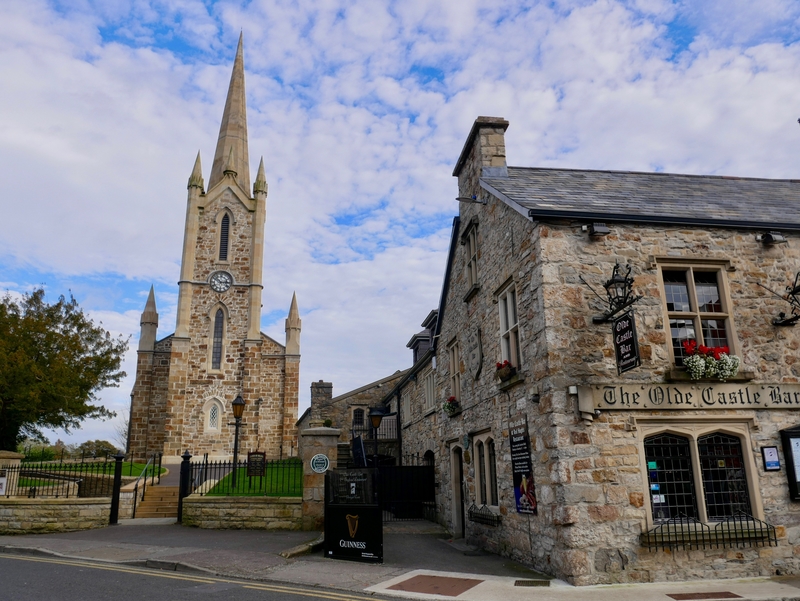 The Donegal Castle was closed during our visit, as was the cathedral. So instead of visiting the town’s monuments, we walked around its cute compact center and found a small cafe for lunch.

After lunch, we continued toward the majestic cliffs of Slieve League.

The Cliffs of Moher get more publicity, but the towering sea cliffs in Donegal are some of the most impressive in all of Ireland. The cliffs of Slieve League (also known as Sliabh Liag) are among the highest in Europe—plunging some 600m into the churning sea below.

From Teelin, a narrow road leads to a lower car park. We parked our car alongside a small handful of other vehicles and began to trek onward, past a gate.

Soon, however, we realized that the narrow vehicular road continues past the gate to an upper parking lot. We turned back, retrieved our car, and drove to the top. 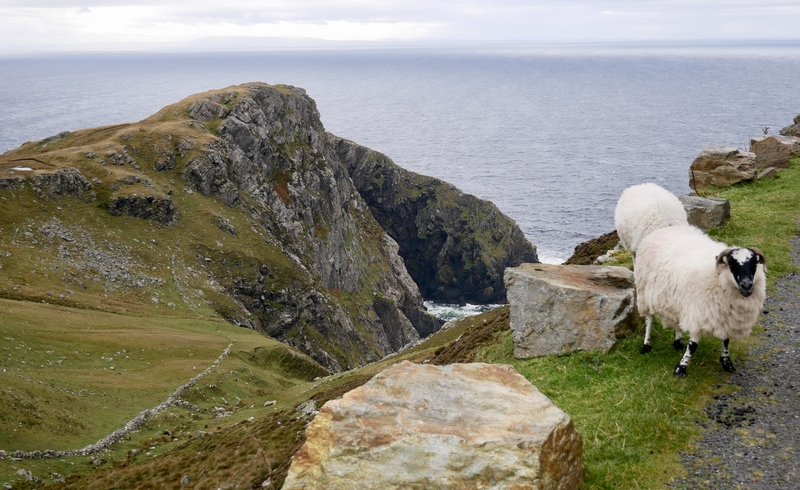 From the upper car park, a rough footpath leads along the edge of the precipitous cliffs, to One Man’s Pass.

We did not make it to the top due to limited daylight and blustery weather.

Still, views in every direction were nothing short of breathtaking. 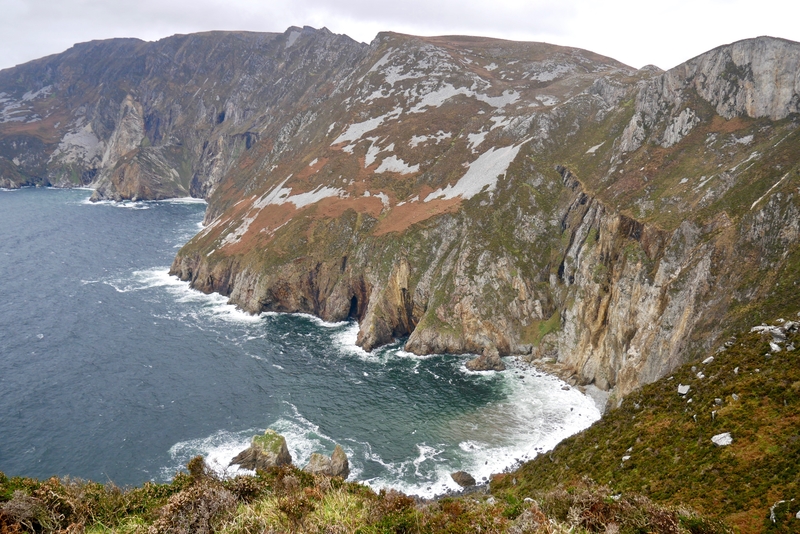 From Slieve League, our route continued past the Glengesh Pass, to Ardara. There, we chose to stay the night at the lovely Lookout Ardara. The cozy guesthouse has near-perfect reviews and an idyllic setting outside of Ardara town.

I wish we had more time so that we could have lingered around Ardara and its nearby waterfall for a few days.

On the following day, we headed inland for a brief visit to the Glenveagh National park. Glenveagh, Ireland’s second-largest national park, boasts a collection of mist-covered lakes, sweeping hillsides, sheep-speckled valleys and isolated forests. It showcases the best of the area’s enticing and unspoiled landscapes. 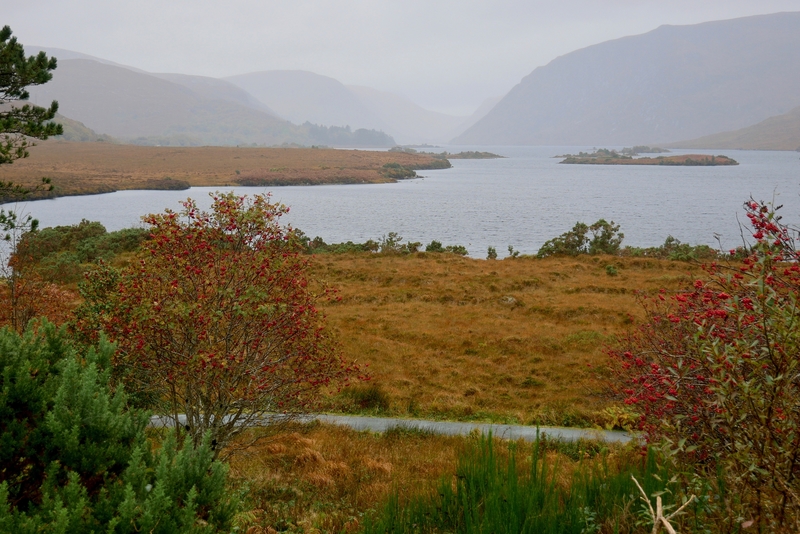 The Glenveagh Castle Gardens are the main reason that most travelers choose to visit the park. Since we visited the area on a rainy October day, we skipped the castle gardens and chose, instead, to savor views of nearby Mount Errigal and the Poisoned Glen.

Mount Errigal is Donegal’s highest mountain and one of Ireland’s most iconic natural features. At its foot, lies the Poisoned Glen—a beautiful valley at the edge of Glenveagh National Park. 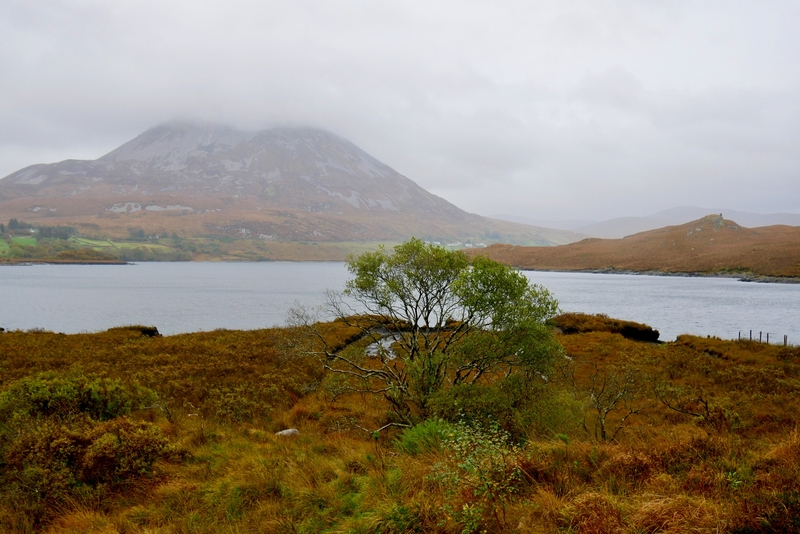 ‘Poisoned Glen’ is likely a mistranslation of the Irish term, Gleann Nemh (Heavenly Glen).  In Gaelic, the words heaven and poison (Neamh and neime  respectively) are confusingly similar.

At any rate, ‘Heavenly Glen’ is a much more apt description of the idyllic valley.

The Horn Head Peninsula lies in the north of Donegal, adjacent to Fanad Head.

The hour-long loop drive around Horn Head encircles an area of treeless heather-clad hillsides ringed with picturesque villages. The circular road offers some stunning viewpoints of the peninsula’s towering cliffs, its quaint coastal towns and its crashing waves. 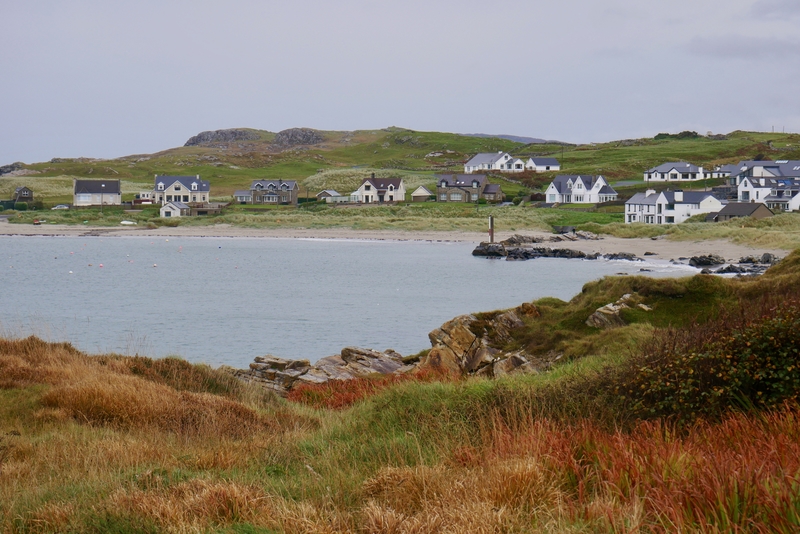 From Dunfanaghy, the coastal road skirts the left side of a beautiful inlet. As the road climbs, spectacular vistas of headlands open up to the east—revealing Rosguill, Fanad and Inishowen in the distance.

Fanad Head sits firmly in the Donegal Gaeltacht, sandwiched between the Horn Head Peninsula and Inishowen. Like its surroundings, the strip of land features chiseled coastline and picture-perfect vistas as every bend.

At the Peninsula’s northern terminus, sits the Fanad Head Lighthouse—a beautifully-positioned beacon that doubles as a guesthouse. 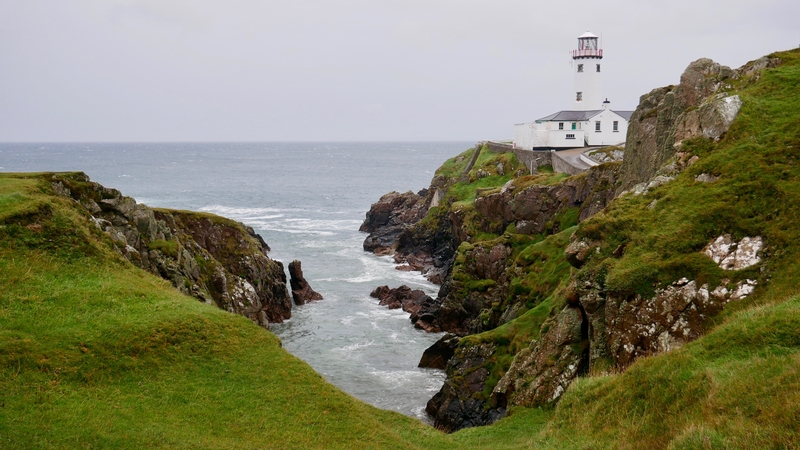 When Dan and I reached the lighthouse parking lot, a sign indicated that the Fanad Head Lighthouse was closed to visitors. We decided to get out of the car to see if we could catch a glimpse of the structure from a nearby lookout.

The wind whipped our faces. We could hear the waves crashing against the area’s rocky shoreline. Rain pelted down with a vengeance. We didn’t pack for Ireland, because traveling to the country was never part of our original plans.

So a few minutes later—shivering from the cold and soaked through to the bone—we turned back.

As soon as we reached the car, however, a man appeared out of nowhere and opened the gates. He allowed us the opportunity to visit the lighthouse grounds.

We grabbed our cameras and set out to photograph the lighthouse and its rugged surroundings. When we were sufficiently soaked, we hopped back in the car and continued toward the beaches of Ballymastocker Bay.

Dan and I found many of Donegal’s best beaches along the eastern shore of the Fanad Peninsula. While it was certainly too cold to jump into the water, we spent a bit of time soaking in views of the sandy bays before continuing on, toward our hotel in Letterkenny.

The Clanree Hotel in Letterkenny—our last-minute booking for the night—was a steal. It offered us clean spacious rooms, an affordable price, and a steamy sauna that warmed us up after a wet afternoon along the Wild Atlantic Way.

I have no doubt, however, that the area is ripe with things to see.

An Afternoon in Dublin

Though our Ireland itinerary focused almost exclusively on the top attractions in County Donegal, we began and ended our road trip in Dublin.

As with most tourists to Ireland, we used Dublin as our gateway to the country. The afternoon we spent in Dublin gave me a taste of the Ireland’s urban offerings. We stayed at the centrally-located Isaac’s Hostel, ate at a traditional Irish pub, and spent the better part of a day wandering through St Stephen’s Green and the Trinity College Campus.

In addition, our limited Dublin itinerary brought us on a whirlwind tour past the Temple Bar, the Dublin Castle and the secret Iveagh Gardens. 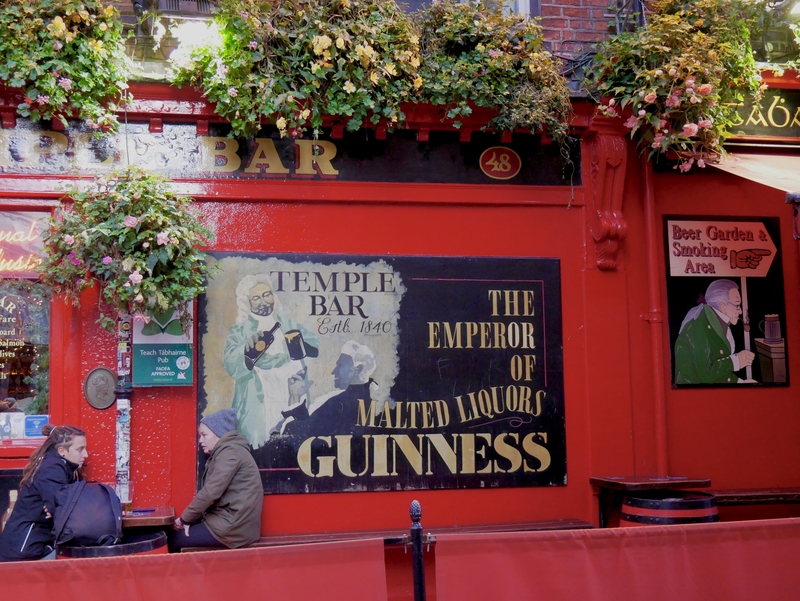 And while I know I only skimmed the surface of things to do in Ireland’s bustling and lively city, my limited itinerary gave me ample excuses to return in the future for a more in-depth visit.

Visiting Ireland was never part of our original plan. But when a SATA Airlines strike forced us to abandon our dreams of visiting the Azores, Dan and I rushed to come up with a last-minute plan B.

We scoured the Lisbon Airport departure board in search of an alternate vacation destination. Due to time constraints, we knew we wanted to stay in Europe. We also knew we wanted access to idyllic nature, verdant scenery, and sleepy coastal towns.

Seemingly at random, we chose to fly to Dublin and take a road trip around the Wild Atlantic Way in Donegal. We had few plans, no set itinerary, and limited knowledge of the area.

Yet, in every single way, Ireland’s County Donegal delivered. 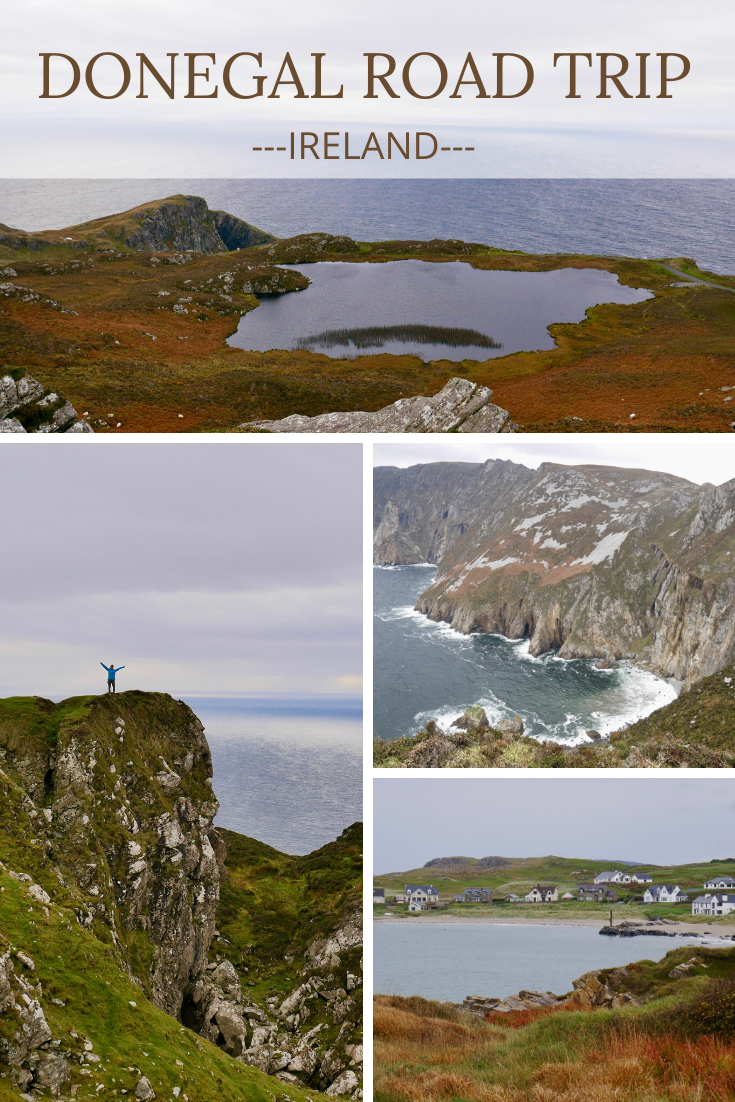 Visiting Barcelona, Spain anytime soon? Then you need to find out about 10 tourist fails to avoid! These are the top tourist mistakes that cost people money, caused embarrassment, or just make your trip less than pleasant. It's important to know the things to do as well as the things NOT to do during your visit to Barcelona. Read on to find out the best Barcelona travel tips for first-time visitors #barcelona #spaintravel #traveltips #europetravel

Dubai, One of the World's Hottest Destinations

At the top of burj Khalifa Dubai #travel #traveli

Fun at the top of burj Khalifa dubai #dubai #topof

Have You Ever Wanted To Make A SIDE-INCOME And Get

Tamil Nadu – A potpourri of culture and festivity